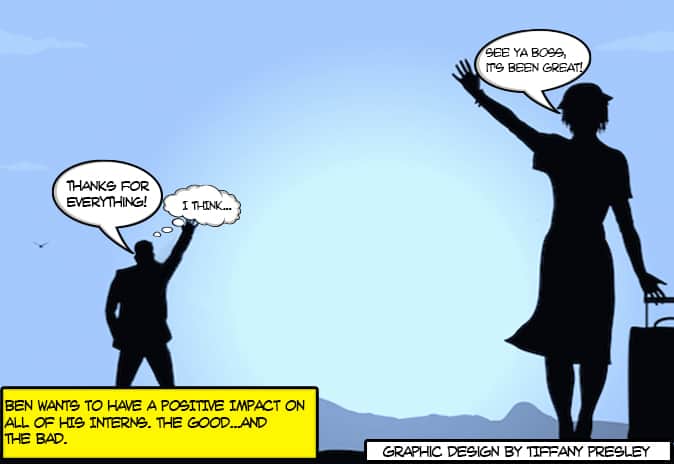 The Best: Your interns have probably put at least a hundred hours (if not more) into making your company a success. They probably did it for little to no money. So say thank you! You could give them a shout-out on your website, buy them lunch, or give them a gift card. Even a small gesture goes a long way.

The Worst: Even the worst intern should have managed to do SOMETHING while they were working for you. If you have a bad intern in a group of good interns, a group thank-you is a good way to deal with it. That way you don’t have to worry about looking unprofessional (or causing any discord among your interns) by singling out anyone who did not pull his or her weight.

The Best: It may be tempting to put off writing a recommendation letter until your intern requests it, but consider writing one while the memories are fresh. The longer you wait, the more you forget, and the less specific your examples (and praise!) will be. Instead, have some thoughts written down for when your intern asks for one—or even have one already written before they leave.

The Worst: Again, it’s important not to cause problems in a group of interns—so you can’t give a recommendation to some interns and not give one to a bad intern. But you could hold on to these recommendations and then reach out at a later date to pass them on—without saying anything to your under-performing intern.

Give an honest review

The Best: Marcy Twete at NBC Chicago recommends creating a formal review process at the end of an internship. This is the perfect time to heap some praise on your best interns. People always appreciate being recognized for their hard work and dedication. If you have a really standout intern, now is the time to let them know—and offer any advice or networking opportunities you can.

The Worst: Honesty is the best policy here, too. If you had a subpar intern, now is your chance to explain what went wrong—and how they can improve. You should still be professional, but it’s important to tell them the truth. Hopefully, they’ll take your advice and make some changes.

Do you have any other suggestions on how to say goodbye to your interns? Let us know in the comments!

Or get your own interns by going here!