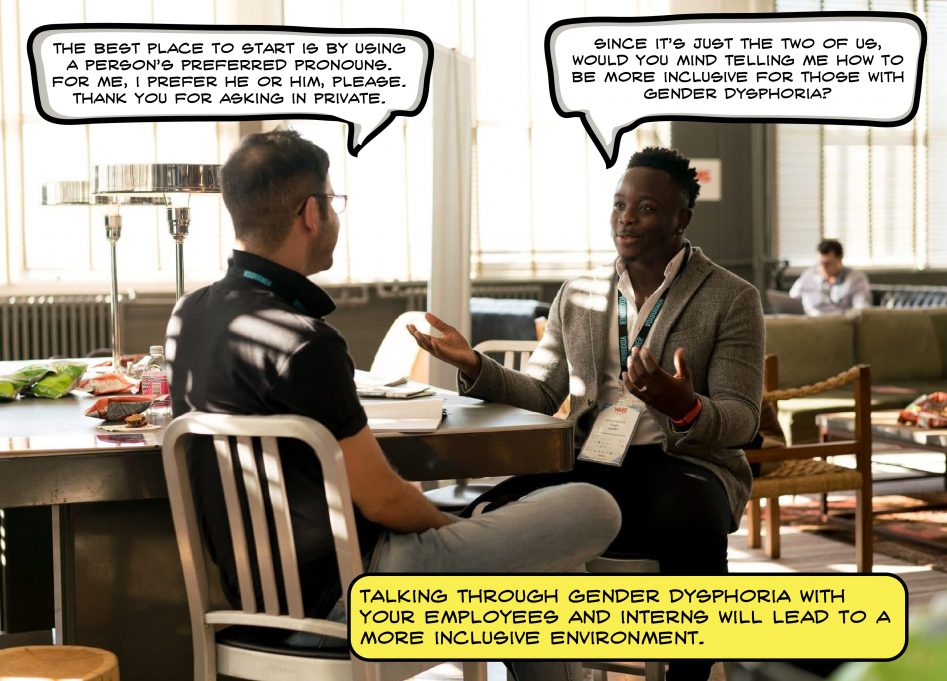 Why Should We Discuss Gender Dysphoria?

Despite being known since the Ancient Greeks and Egyptians, gender dysphoria still feels like new and uncharted territory.  With recent news, people with gender dysphoria caught the attention of the nation. Whether we want to admit it or not, people who live with gender dysphoria need jobs and internships to survive. Transgender individuals have been working alongside us and offering services to us for thousands of years. Despite this history, many business owners still have trouble discussing gender dysphoria with interns and employees.

What exactly IS Gender Dysphoria?

People who struggle with gender dysphoria are more commonly known as “transgender” today. Trans people are individuals who identify with a gender that differs from the one assigned to them at birth and/or their biological sex. Gender Dysphoria recently went by “Gender Identity Disorder” in the Diagnostic and Statistical Manual of Mental Disorders or “DSM.” Despite being labeled as a mental disorder, many are vying for the removal of gender dysphoria from the DSM just as homosexuality was in 1973. Studies and theories led psychologists to agree that non-heterosexuality does not induce the distress individuals may feel, but rather the feelings that others display towards them. The same can be said for gender dysphoria. Often the root of the issue lies with societal stigma and discrimination.

Transgender individuals make up a whopping 700k people in the American adult population. That’s approximately the same as the population of Seattle, WA. With 700k employees and interns in America, one would assume there would be an easy way to discuss gender dysphoria.

How Can I Handle This Professionally?

These touchy topics can be difficult to discuss. Employers and transgender interns can both feel awkward when the subject is on the table. However, there can be an easy way to talk about gender dysphoria if you know where to begin and what to watch out for.

Taking note of these tips can help you grow into a more supportive and understanding business owner. Not only will you become a safe space for employees and interns but also for possible LGBTQ clients!

Take a Moment to Listen to your Interns

Discussing gender dysphoria can be a difficult hurdle to jump. However, it’s entirely possible to treat your transgender interns with the same respect their cisgender associates get. We support the fair treatment and equality of employees and interns no matter their age, race, sexuality, or gender identity. If you ever need a virtual intern or are in need of an internship, come find us at SuperInterns.com!