Being a military spouse is like a full-time job without benefits, and no pay. You may find it difficult to maintain a professional career. As you’ve probably figured out, the military wants a lot from you. For instance, you must be able to adapt to drastic change as moving from place to place is expected. However, thanks to military spouse networking, you can still build a professional career despite an unpredictable lifestyle.

It Takes a Community

Also, It’s important to note: no one is an island, and you shouldn’t aspire to be. Why choose to be a small island in the middle of nowhere when you can create a country of happy citizens? Keep this in mind, no piece of land becomes a country on its own. It takes a community of people to make any country great. So in order to further your career, you’ll need people to help you along the way.

A Spider and the Web

As a military spouse, developing professional relationships can be difficult. Relocating puts you in unfamiliar places with complete strangers. For this reason, you may find yourself in a position where you’re constantly starting from scratch. To make matters worse, it’s likely you may not live in a place with a local job center nearby. So what do you do? Turn to social media. Through online platforms, you can find an audience of like-minded individuals who hold the same passions as you.

Military spouse networking is easy through online platforms, such as LinkedIn. These online platforms are specifically designed to create pathways where you can interact with people. You’ll be like a spider building a web. Using one person as a link can put you into contact with another and so on. Before you know it, you’ll have an entire community of people to work with. No longer do you have to worry about where you live when job searching. Through social media, you can communicate with anyone around the world from the comfort of your own home.

Kimber Hill, an active Duty Milspouse and founder of Virtforce, states that LinkedIn is a great platform for military spouse networking. Hill says,

“A lot of negative self-talk may have you questioning your motives or questioning the way you reach out to an individual on LinkedIn. But know that if there is a LinkedIn profile there, that means that person wants to be viewed and wants to connect. So you can trust the process and that LinkedIn is a safe platform for you to connect with fellow professionals.” 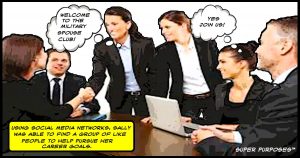 In addition to social media networks, use other platforms to build professional relationships. Blogs, listservs, newsgroups, and internet forums are great for military spouse networking. Through these online platforms, you’ll learn more about your career field and find specific job openings that aren’t known to the public.

Be a People Person

You don’t have to solely rely on the internet to build professional relationships. Besides, meeting people online isn’t the same as meeting them in person. You can find professional events that can be beneficial. For example, find local organizations or start groups within your community.

Using a site like meetup.com can help you find people with similar career interests and passions. On this website, groups are formed based on career type and experience level. However, if you don’t find a group that fits your interests, you can start your own.

Being a part of the military does have its perks. For instance, you’re provided a community of people to build business relationships with. So take advantage of the career centers and spouse groups within the military community.

The Importance of Self-Marketing

Military spouse networking works well if you know yourself. So don’t allow the role of ‘military spouse’ to define who you are. Even though you’re a military spouse, remember you’re more than that. Once you do, portray this part of yourself when building your professional relationships.

In this article posted on military.com, Raleigh Duttweiller explains why communication is necessary in establishing professional relationships. Duttweiller says,

“Conversation is a way for you to generate buzz about yourself. Be honest about what you want, what you’ve done, and where you want to go. Even if no one knows anyone who does, say, molecular biology, someone might know someone who does something similar. If they can put you in touch, you are one step closer to putting a concrete contact in your professional network.”

Military spouse networking is an important skill. So step outside your comfort zone as you cannot be a one-person army in the corporate world. Understand that a community of people with similar values as your own is beneficial. With a group of like-minded people, you can go far in your career field. By having a team, you can gain job experience and establish connections that can help further your career.